On September 2nd, 2018 at about 7:30 PM local time, the National Museum of Brazil caught fire.  The fire spread with alacrity as the building was filled with wood and parchment.  Local firefighters were unable to effectively combat the blaze, as nearby fire hydrants were dry and the nearest source of water was a lake close by in the Quinta de Bao Vista urban park.  Despite the best efforts of both firefighters and museum employees, the fire consumed the entire main building of the National Museum.  All three floors of the museum’s main building collapsed and the building was gutted before the fires eventually subsided.  The National Museum held over 20 million pieces ranging from natural history to mineralogy. 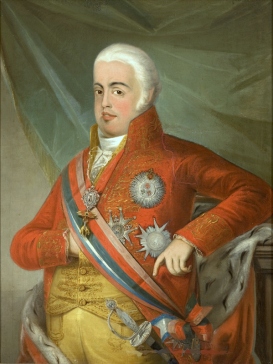 Even the main building of the National Museum was regarded as a national treasure.  The building, whose English name can be translated from Portuguese to Saint Christopher’s Palace, was built in 1803 on the site of a former Jesuit farm.  While it was originally the manor house of a prominent Lisbon merchant, the mansion would grow to prominence in 1807.  As Napoleon marched across mainland Europe in early 1800, he set his sights on Portugal, owing to the country’s alliance with his hated enemy Great Britain.  The Peninsular War soon turned into a series of victories for Napoleon’s France and their Spanish allies and by November the French were ready to march on the capital of Lisbon.  On November 29th 1807, Prince Regent John IV made the decision to flee the country on behalf of Queen Maria I.  Queen Maria, Prince John and their household of roughly 15,000 men and women fled Lisbon with the aid of the British Navy.  They made for Portugal’s largest colony in Brazil. 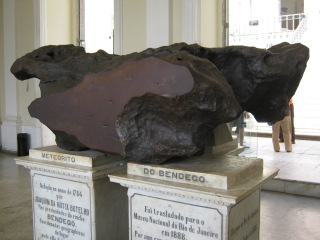 The Bendegó Meteorite.  It survived the fire with no major damage.

Soon after arriving in the country, Saint Christopher’s Palace was donated to the royal family.  Prince John (soon King John) ruled from the new Imperial Palace from 1808 to 1820.  In 1820, hoping to boost the esteem of Brazil in the eyes of the world, created the Royal Museum of Brazil and went so far as to donate the Palace to the fledgling institute as a sign of his faith in the establishment.  Interestingly, the museum’s collection would fluctuate, grow and adapt with the changing of emperors.  Under the watch of Brazil’s first emperor, Pedro I, the museum was a haven for naturalists and biologists.  At the turn of the century, Emperor Pedro II shifted priorities and as an amateur enthusiast himself drove an interest in the growing fields of archaeology and paleontology.  The net effect of this created a museum with an incredibly broad collection of artifacts and exhibits.  The biodiversity of Brazil was celebrated alongside Egyptian artifacts and several mummies.  The largest meteorite in Brazil was cataloged along with feather art of indigenous peoples.

Perhaps one of the most iconic pieces in the museum’s collection was Luzia Woman.  Luzia, whose name is a homage to Lucy, the remains of an Australopithecus found in Ethiopia, is a skeleton from the Upper Paleolithic era.  Most notable is Luzia’s amazingly intact skull which has been used to digitally reconstruct what Luzia and her people may have looked like.  Luzia is important because it’s believed that Luzia arrived in Brazil as part of one of the first migrations into South America, roughly ten thousand years ago.  This would make Luzia Woman the oldest recorded human remains in South America.  Unfortunately, Luzia was on display on September 2nd and she is believed to have been lost.  Not all of the news is bad.  Many of the museum’s collections, in particularly the collection of vertebrates assembled by the museum, were not housed in the main Palace building.  Such are the small favors in the face of this disaster.

All across Brazil, the outpouring of emotion has been felt.  President Michel Temer has called the losses to Brazilian culture “incalculable.”  But these sentiments ring hollow to many within the country.  In 2016, the country passed a bill that froze social spending in the country for 20 years.  The effort was made to fight a recession in Brazil, and only allowed social spending to rise to match yearly inflation levels.   That said, even two years ago critics were calling the effort draconian.  Now two years later, protesters are already blaming the austerity measures for the destruction of the museum, claiming the fire was a tragedy that was preventable.  The museum had seen its own funding cut by roughly 520,000 Brazilian real (a little over 125,000 US Dollars), and maintenance had declined significantly prior to the fire’s outbreak.

I’ve been thinking about journalism a lot lately, for obvious reason.  I’m of the opinion that the purpose of journalism isn’t just to report the news of the world, but to provide context for that news.  That context is the service that journalists provide to their community.  Like many people, I was caught completely by surprise when I heard the news about the National Museum and I was unprepared for how it affected me.  I volunteer at two museums right now.  The closest thing to a “beat,” on this website is my reporting on the events of those two museums.  A lot of my nostalgia from growing up is related to museums.  The Balboa Park complex in San Diego, the Museum of Science and History in Jacksonville, and the Pink Palace in Memphis among others.  When my family visited relatives in Fairfax, Virginia we almost always took public transit into Washington and visited at least one of the Smithsonian museums.   I have distinct memories of all of these places and they are a large part of who I am.

I would have never considered visiting the former Imperial Palace but I still felt an immense sense of loss upon hearing this news.  Even if I’m not Brazilian I can empathize with this immense loss of culture and shared knowledge in the fires of September 2nd.  Because what was lost wasn’t just Brazilian.  The coffin of Sha-Amun-en-su was on display in the National Museum and the collection contained frescoes and pottery from the Mediterranean.  I’ve already touched on the immense collection of indigenous artworks from the Inca, Nazca, Wari and other peoples from South America.  The context of this loss is universal because the National Museum’s mission is universal.  The recovery of the National Museum will take some time, but it will happen.  There has already been an international outpouring of support from professionals across the industry and fields of research.  That’s why I chose to write about this tragedy.  That’s why I want to be a journalist and to those who work in the National Museum I say: Meu coração vai para você.

“No man is an island,

Each is a piece of the continent,

A part of the main.

If a clod be washed away by the sea,

Europe is the less.

As well as if a promontory were.

As well as if a manor of thine own

Or of thine friend’s were.

Each man’s death diminishes me,

For I am involved in mankind.

Therefore, send not to know

For whom the bell tolls,

It tolls for thee.”

Teacher and Blogger Living in South Carolina. View all posts by Tim Sebring